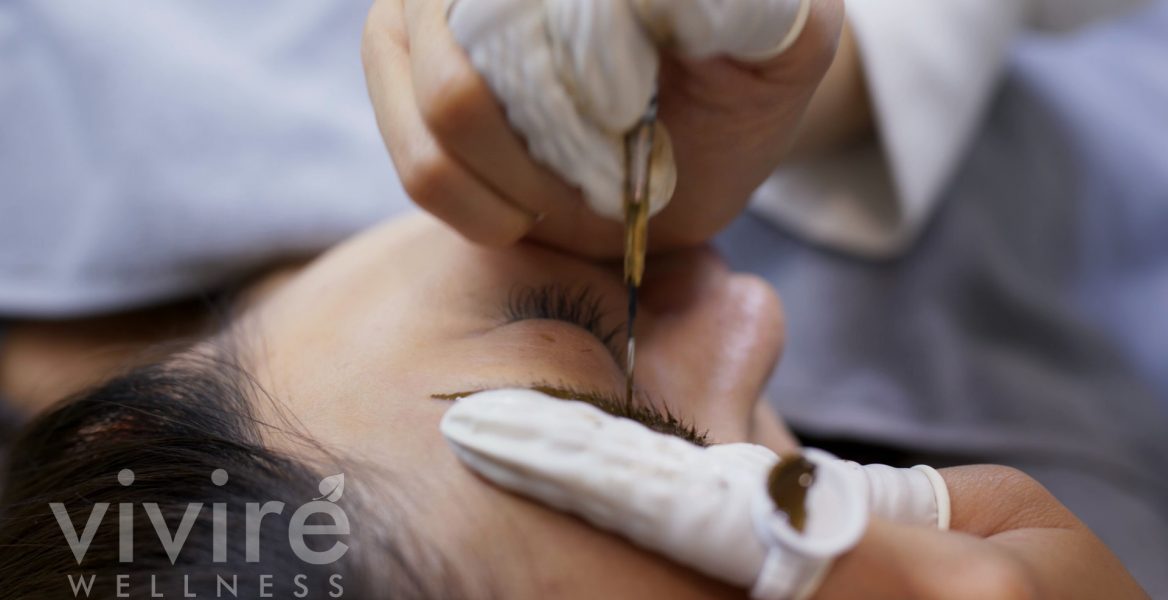 Women all over the world are taking advantage of this new and safe way to make their brows look full without the hassle of having to apply makeup every morning. Benefits:

Microblading in Davie is currently the fastest-growing segment of the cosmetic tattooing industry. Microblading is also known by a variety of names such as permanent cosmetics. micro-pigmentation, dermal implantation. eyebrow embroidery, micro stroking, feather touch, or hair strokes. These are all forms of permanent makeup that provide partial to moderate coverage while giving the appearance of simulated hair by depositing small amounts of cosmetic tattoo pigment into the dermis. The technique of implanting dyes or pigments into the dermis date back thousands of years, however, the trend towards using fine stroke techniques for eyebrows only emerged in recent years.
Microblading is performed by manually depositing pigment into the dermis with the use of a hand tool. The microblade head contains fine needle groupings that come in a variety of pins and shapes to customize your client's brows.
Many people are under the impression that microblading is a semi-permanent tattoo, meaning that it will fade completely away after a period of time. This is not true. If pigment particles do not reach the dermis, they will disappear during the healing phase of the skin during normal regeneration of the epidermal cells. If done properly, the pigment will reach the dermis and therefore become permanent. although the pigment will fade over time and will require touch-ups approximately every two years.

Note: Microblading in Broward does not appear to "last.' os long as other types of tattooing techniques because of the small amount of pigment that's inserted during the procedure.
Microblogging involves injuring the skin and takes a thorough knowledge of skin physiology, an understanding of bloodborne pathogens. as well as a commitment to practicing proper safety and sanitation. All handpieces and consumables should be sterilized and single-use. Reusing handpieces while using disposable blades is not sufficient enough to protect against bloodborne pathogens.
The most common complications that result from microblading is misapplication, pigment migration and color change, which we will discuss in a later chapter.
The information contained in this manual is not intended to encompass all microblading theory. It is necessary to receive quality hands-on practical training as well as in-depth theoretical knowledge. Information changes in os practices evolve. We assume no liability in using this manual as a training device
All photos used in this manual are adobe stock unless otherwise noted.

The origin of the word 'tattoo' is believed to have two major derivations; the first is from the Polynesian word totau which means "to write". From a scientific standpoint - tattoos are created by the insertion of colored inks, pigments, or dyes beneath the skin's surface or epidermis.
The first known tattoo was discovered on the preserved flesh of Otzi the Ice Man. 61 tattoos were found on Otzi's body. all in the form of lines or crosses. Unlike modern tattoos. they were not made with o needle; they were created by making a number of fine incisions into which pulverized charcoal was rubbed.
The tattoos are located near his ribcage. the lumbar spine, wrist, knee. calves and ankles.
For centuries Berbers in mountainous regions of North Africa used this kind of therapeutic tattoo to treat rheumatic pains.
Anthropologists believe a traditional healer made incisions in Otzi's skin on the afflicted areas, placing medicinal herbs in the wound which were then burned with the point of a heated metal instrument. The charred residue was incorporated in the resulting scar.

Give a Reply Cancel reply